Curves are a normal part of the spine’s structure. Looking at the spine from the side (lateral), several curves can be seen (Figure 1-A). From this angle, the spine almost resembles a soft ‘S’ shape. When viewing the spinal column from the rear (posterior), the spine appears vertically straight — from the neck to the tailbone (Figure 1-B). The normal curves are termed lordosis and kyphosis. However, the natural curves should not be mistaken for spinal disorders also called Lordosis and Kyphosis. We will talk about abnormal curves later in this article. 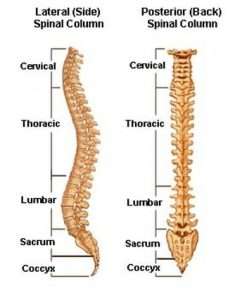 Abnormal Curves
As mentioned earlier, Lordosis and Kyphosis are terms that are used to refer to specific spinal disorders. Scoliosis is another type of disorder identified by abnormal curvature of the spine. Each of these disorders is defined below.

Lordosis is defined by an excessive inward curve of the spine. Although it primary affects the lumbar spine, it does occur in the neck too. Patients with excessive lumbar lordosis may appear swayback, the buttocks more prominent, and in general their posture appears exaggerated. Lordosis affects people of all ages and when it affects the low back, it can cause back pain making movement difficult and painful. Spondylolisthesis, osteoporosis, and even obesity may lead to abnormal lordosis.

Kyphosis is defined by an excessive outward curve of the spine and may cause a deformity such as a humpback or hunchback. Abnormal kyphosis is more commonly found in the thoracic or thoracolumbar (chest area/low back), but can affect the neck too. Patients with excessive kyphosis may appear with a pitched-forward appearance. There are two types of abnormal kyphosis; that caused by poor posture and structural kyphosis. 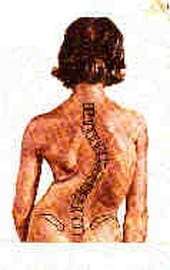 Scoliosis is the abnormal curving of the spine to the left or right side (Figure 2). Scoliosis most often affects the thoracic spine and children, although it is found in adults too.
Figure 2 – Scoliotic Curve